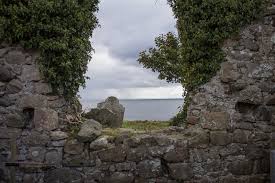 Recently, the worship director at my church sent me an excerpt from a work by William Stringfellow where he talks about how early Celtic Christians had a notion of “thin places,” places where the boundaries between this world and the heavenly realm thin and the divine becomes more tangible.  Stringfellow suggests that perhaps it’s not just certain locations (such as a mountain top or the seaside) that are thin, but also times of the year–in particular, times in the church calendar like Advent.

As I thought about this over the next few days, I was reminded of a sermon my pastor delivered a few years ago in which he explained the history of the Jewish Tabernacle and connected it to the idea that Christians are the new Tabernacle.  In other words, whereas God’s presence was once located in the Temple and known as the Holy of Holies, accessible only to the High Priest, now God dwells in us through the intercession of Christ, the new High Priest.  The idea of Christ indwelling me is not new (that’s kind of one of the basics of being a Christian), but in modern-day Christianity, the whole inviting-Jesus-into-your-heart thing has, in many respects, become fairly casual and/or saccharine:  Jesus as your Best Buddy, co-pilot, or the invisible dude carrying you across the sand.  In other words, a relationship that is completely personal and best illustrated by non-threatening clichés.  The God that we enlightened moderns pray to is totally different (in our minds) from the God of the Old Testament, who would strike people dead if they accidentally touched the wrong thing or looked in the wrong direction or went past the curtain without the proper authority and rituals.

But it is the same God–we’ve just sanitized him and made him in the image we’re most comfortable with.  And a lot of us have turned the notion of holiness into a way of being judgmental and/or fearful about everyone else rather than considering what it actually means to have that holiness living inside us–to be the living, breathing, walking places of God.  That sermon gave me a bit of a shake-up, and the dissonance it awakened me to inspired this poem:

Day of the Tabernacle

Today my holy of holies ate cereal for breakfast
while checking e-mail and Facebook updates.

My holy of holies drove to work and cursed
the woman driving too slowly in the car ahead.

My holy of holies got a headache and wished
she didn’t have to work with such incompetent people.

My holy of holies ate too much candy
then examined her belly fat in the mirror.

My holy of holies went for a jog,
knowing cardiovascular health is important.

My holy of holies ignored her sister’s phone call,
preferring to read a magazine instead.

My holy of holies took a shower
and ate dinner in front of the TV.

Then my holy of holies turned off
all the lights and went to bed.

I had forgotten about this poem and the perspective-altering sermon (I think this is one of the great sins, actually:  constantly forgetting what is true and real and challenges us) until this whole Thin Places business.  Because really, we who profess to be Christians are the Thin Places.  Or at least we ought to be.  We ought to be the places where others catch glimpses of the facets of God’s character we were created to reflect.  We ought to be thin enough for Christ to shine through so others might see something of his beauty and goodness and peace.  But instead we are so often–or rather I am so often–busy running around and living one task or event or problem to the next that instead of a glimpse there is only a blur.  I get so caught up in seeking to gratify and fulfill myself that I forget I am not here for myself.

One of my favorite verses in the Bible is the command to “be still and know that I am God.”  True stillness, especially for someone like me, who likes to optimize her time and measure success by tangible productivity, is a constant struggle.  And yet I yearn for it and hope that in practicing even tiny moments of stillness (where I can cease striving long enough to be fully present to others and truly listen as others have to me) not only would I know God and remember that he is in my midst, but those around me would as well.

1 thought on “An Advent of Thin Places”