There were a number of poets at the festival, and it was wonderful to hear them talk about their work and especially to hear them read their own poems.  Hearing any author read his/her work adds a depth and dimension that you just can’t replicate when you read it to yourself from the page, but I think this is especially true of poetry.  Maybe because poetry is (in part) a kind of music–as much an auditory experience of rhythm and sound as it is idea and meaning.  Below are some nuggets from three different poets. 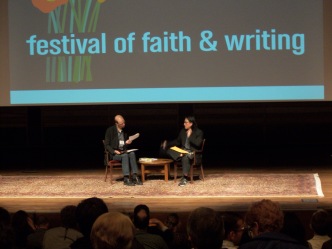 1.  He continually revises poems, even after they’re published.  Poems have two lives–they participate in a market economy and then there’s the level where they’re between him and God.  He does find that sometimes after he revises a published poem numerous additional times that the published version is actually the best version of it.

2.  He comes to the page each day and asks if there’s any word from the Lord, and then he writes and writes, but often, it’s just his own words.  He doesn’t want to be a writer/poet so much as he wants to make contact with the divine.  When he’s revising the poem, he’s also revising himself.

3.  Safety is of great concern to him.  The poems he heard in high school were beautiful but ‘unsafe.’  Christ’s voice in the New Testament is safe.  Blake’s voice in his poetry is safe.  Lee also wants to be a safe person.  When asked to define more clearly what he meant by ‘safe,’ he replied that safe poets are fully realized or wise; they bless what needs to be blessed and kill what needs to be killed.  Poets he put in this category are Adrienne Rich (“her later poems”), Philip Levine (“early poems”), Louise Bogan, Rilke, and Lorca.  Also loves John Logan (Catholic poet), Blake, and Dickinson.

4.  Prayer and poetry are refuges.  The paradigm for poetry is DNA–a compact structure that you can unpack infinitely.  “Practice until you feel the language inside you.”

5.  Commenting on his experience as an immigrant:  being a stranger is a powerful place to be–you can see things others can’t; you ask questions others don’t think to ask.

Poem he read at the beginning of the interview:  http://www.poetryfoundation.org/poem/182921

1.  Part of what we do as writers is preserve things–writing has a ‘fixing’ effect.  Our country is becoming increasingly homogenized.  He loves meeting and talking to the ‘old-timers’ in Kentucky (his home) because they talk in a way that’s different and unique to their particular region.  That’s disappearing.

2.  Asked why he can be so honest in his poems (referring in particular to his poems written as prayers):  poetry implies a greater degree of intimacy (or can have) than prayer, which can be too formal for intimacy;  poetry needs to be a little messy–a few things out of place, “not like a linen closet.”

3.  He admires William Blake and feels that if you’re going to follow an impulse, you have to acknowledge its opposite.

4.  “It’s a great delight to take your dog on a walk on the leash and at a certain point, taking off the leash and letting it go.”  The same is true for poetry–the leash can be a good thing, but there are also moments where you need to let the poem go, let it run away from you and see where it goes.  “I follow my curiosity.”

Read more about and by Maurice here:http://www.poetryfoundation.org/bio/maurice-manning

I attended a talk Susanna gave about using fictive elements in poetry, so most of these notes are related to that topic.

1.  the social contract between poet and reader isn’t as clear as it is with prose, which has fiction and non-fiction categories.  In poetry, it’s not always clear when the content is about the author, whether the speaker is the poet, etc.

2.  she likes to write a kind of hybrid of persona and personally fictive.  She will draw from friends’ experiences/stories as well as her own, and she will change details to fit whatever she’s trying to get across in the poem.

3.  there is the literal/historic truth about what really happened, and then there is the underlying truth–the poet’s allegiance should be primarily to the latter.  Sometimes content needs to bend to the truth.  Christian Wiman quote:  “To be a writer is to betray the facts

4.  using the fictive/imaginative in our own poems is important because we need to distance ourselves from our own experience.  We’re too tied to things and this can help us step back and focus on craft.  Also, when we employ fictive and imaginative elements, we haven’t arrived at meaning already.  Scott Cairns quote:  “The poem is where our words teach us what we haven’t yet apprehended.”

5.  It is the process and the place it takes us into–the threshold/sympathy.  When we can get there with other people’s experiences, it makes us wider and takes us out of ourselves.

6.  When asked about revision later, she said that her main ‘test’ of whether a poem is finished or not is if she can read it aloud all the way through and not think “chickenshit.”

Read one of her poems here:  http://www.blackbird.vcu.edu/v4n1/poetry/childress_s/what.htm